The Canadian Train from Vancouver to Toronto

Great experience, pity about the train and the staff. Our reason for taking the Canadian train across Canada was to get an idea of the scale of the country and what was there. I was glad I took the trip, we saw Canada, but there are some problems with the train itself. The rolling stock dates from 1955 and is somewhat faded and scruffy. In addition many of the staff are what central casting would supply if you asked for British Rail staff from that period - in other words, they do not offer much enhancement to the travel experience! You should be warned too that there is no "commentary" or literature provided for the journey, apart from a desultory few words a couple of times a day over the intercom. One would have thought that they could have supplied a small booklet on the mileages, the stations and the history of what we were passing through. They set out to give a trans Canada experience, but only actually deliver the transport from A to B without any frills.

The Canadian train is today the only way you can cross Canada, or indeed North America, by rail. It is a 4 night train trip from Vancouver to Toronto (or vice versa) Run by Via Rail. The Canadian runs between Toronto and Vancouver three times a week, traveling 4.466 kms. We travelled Silver & Blue Class (their name for First Class). You start around 8 in the evening and arrive around 8 in the morning, having spent 4 nights on the train.

They promise "cosy accommodations", "delicious meals" and exclusive access to the Park Car with 360 degree panoramic views. And, in addition, touches like "a shower kit, bottled water and ear plugs", plus "priority boarding from the exclusive pre-boarding lounge in Toronto and Vancouver." The ViaRail web site promises

"You wake up and open the curtains to be greeted by the majestic Rocky Mountains slowly emerging from a veil of clouds. You prepare quickly for breakfast, spurred on by the gentle rocking of the train and the promise of freshly brewed coffee. After leisurely savouring your breakfast omelette, you collect your book and head to the Skyline car. There, you'll sip, read, socialize... and scan the panoramic view for a glimpse of elk moving across the valley. Relive the romance of train travel "

However this is not a modern luxury train like the Orient Express, but they do not tell you that. ViaRail is the government owned company that operates what was formerly the Canadian Pacific passenger rolling stock. The route from Vancouver to Toronto today follows the slightly more northerly Canadian national route, rather than the original Canadian Pacific Route. ViaRail uses the original 1955 stainless steel rolling stock, so you are travelling in a 50 year old museum piece. Wikipedia have more on the technicalities

"I think part of the problem was that my expectations were too high. I was expecting, if not exactly the Orient Express, something a bit luxurious (as that is how ViaRail sell The Canadian). Which is why I was disappointed, because luxurious it ain't...... I was hugely disappointed with the train, which is shabby (and we were in first class). The sleeping cabin was the tiniest I have ever been in, hardly room to turn around when the bunks were set up. It was worn, shabby and scruffy. The staff appeared to resent the presence of the passengers (very strange, because all over Canada people were so nice and friendly). The food in the restaurant was poor. I could go on. I had always thought it would be nice to take the train across Canada."

We opted for a "double cabin", rather than one of the "berths" in first class. Given we thought this double cabin was small, I really would not like a "berth" which are smaller still. A number of people on our trip paid to upgrade from berth to a cabin, as they were so horrified at their berth accommodation. A cabin looks like this 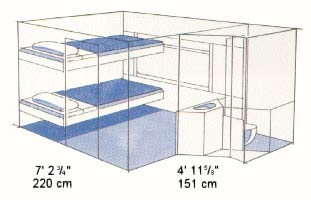 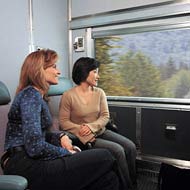 But you an see from the actual size that it is very small with the beds down & they have cunningly taken the photo without the ladder for the top bunk which takes up much of the spare space. Room size: 2.2 m x 1.5 m (7 ft 3 in. X 5 ft), excluding 84 cm x 64 cm (2 ft 9 in x 2 ft 1 in) for private washroom. Take off 3 ft for the bed and you are left with 2ft spare to roam around in. The toilet is tiny, anyone overweight would have extreme difficulty using it, think 2ft 9in x 2ft put a toilet boel into that space, and there is not much room for the user.

There are no no door locks on the outside of the door, so your cabin is not lockable when you are out of it. There is one shared shower per carriage - so a pre-breakfast shower is difficult to get, think in terms of having your shower mid-morning.

You need to be aware that the storage space in the cabin is very small. There are no drawers for clothes, and the closet is 3 inches wide, so takes very little. We put our changes of socks and underwear in plastic bags to make them easily accessible during the trip. And when they say "Maximum dimensions of each carry-on: 66 x 46 x 23 cm (26 x 18 x 9 in.)" , that is a fair indication of the size of case that you can stuff up high over the wash basin.

And be warned, the sound insulation to the cabin next door is non existant - you can hear everything!

The food was reasonable without being "gourmet".

Breakfast was the same choice each day and you turned up for the meal when you wanted, but there were not enough tables to accommodate everyone, so there tended to be a long wait for a table. I had the "Transcontinental" each day, and apart from the hash browns which you could not avoid, and the terrible coffee, the rest was very pleasant. The coffee was certainly not "fresh brewed", and did not even taste of coffee. At breakfast each day you got a "sitting" for lunch and dinner. With luck you got a sitting that was acceptable to you. With 3 sittings, lunch was offered at 11am, 12.30 or 2pm. 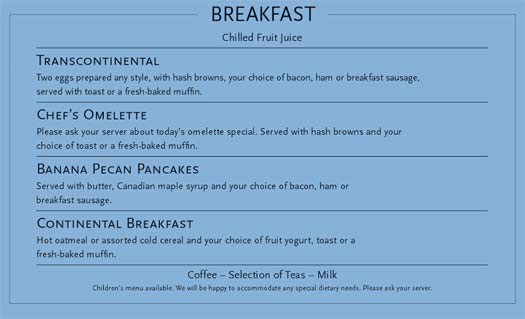 Lunch was more of the North American snack than a meal, but was again pleasant. Service was rushed, as the staff wanted to get you through as quickly as possible. For example, plates of each person were removed as soon as they were finished

Dinner was the most gracious meal of the day. Again rushed, but did have some of the ambiance of a good restaurant, if not unhurried elegance. 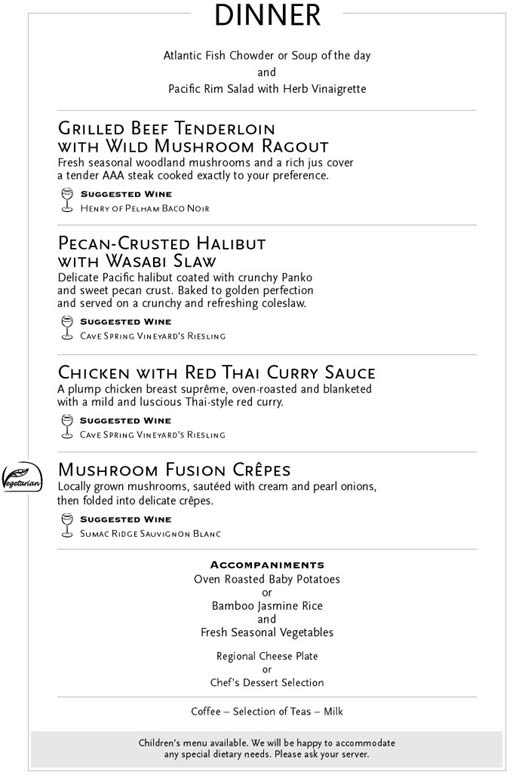 Most of our time was spent in the Park Observation car, that is the last car on the train, with an observation dome upstairs, and a view out at the back on the lower level.

Here you could chat all day or just observe the passing countryside. One of the really nice things about this sort of trip - there were 97 people on the train, 48 of whom were in first class - is that you can talk to anybody without feeling you are intruding. One can strike up remarkable discussions -as a Northern Ireland protestant, I had long and interesting chats to Jim Lavelle, who sported a Sinn Fein t-shirt complete with pictures of Jerry Adams and Martin McGuiness.

Fresh fruit was available here on a help yourself basis, as was more of the undrinkable coffee, or, as an alternative, luke warm water for tea. There was a bar, but as that was largely used for staff relaxation, it seemed to be off limits to passengers.

The staff keep themselves to themselves. There is no real greeting on getting aboard. We were not told where the dining car was, what time meals were at, how we got assigned mealtimes, what the procedure was for getting the cabin changed from day mode to night mode, etc. They ran on the assumption that the easiest course of life was to avoid the passengers. No first class service here.

The extremely aggressive dining car supervisor on the leg from Vancouver to Winnipeg spoilt the dining experience for us, and for many. In the end the train director had to summon him for a hearing and told him that his attitude was not acceptable. However that did not help us, and we were glad to see the back of him at Winnipeg. The man was a power mad dictator, who looked on the passengers to obey all his petty rules. The man was a disgrace, and should not have been allowed to run a dining car.

There apparently was an entertainment car, where someone organised things like quizzes and wine tastings, but in an effort to reduce their work load and reduce the number of passengers attending, the staff never actually announced where and when, so they passed my by.

There were meant to be regular "champagne" (actually sparking wine) receptions at Vancouver, Jasper, Winnipeg. However little was served, staff came round once with canapees (they were very good, those very small little nibbles), you got one, then they never re-appeared! The wine was in plastic glasses.

To make this readable, I have broken the trip down into daily chunks. Click to read each day.

Day 1 - Vancouver to Kamloops an evening to settle in.

Day 2 - Kamloops to Jasper and Edmonton through the Rockies

Day 3 - Edmonton to Winnipeg across the Prairies

Day 4 - Winnipeg to Toronto across the Canadian Shield

If you want to read up about the railways in Canada, and their constructio then try some of these books

The Last Spike by Pierre Berton

The National Dream, the great railway by Pierre Berton

Railway Country - across Canada by Train

You can zoom on this map

Return to all holidays